Rules and Rulers – as well as hypocrisy

You gotta love the (even unintended) hypocrisy. They currently impose financial robbery on people for using phones in their cars. But today, every single new car literally has an iPad on the dashboard that requires more distraction than ever to use! Will they repeal those retarded “distracted driver” laws? No way in hell. Your hell.

Rules and Rulers – as well as hypocrisy

If they – those who rule us – were at least consistent, it might be easier to believe their rules had a purpose . . . other than to rule us.

Consider the juxtaposition of the cell phone and the in-car cell phone – the LCD touchscreen almost every new car comes standard with. Both are fundamentally the same thing – a touch/tap/swipe interface. This form of control requires visual concentration – you have to look at what you are trying to touch/tap/swipe because you cannot accurately do it purely by feel. It is literally impossible because the screen feels the same, no matter where you touch/tap/swipe.

And when it is moving, it is even harder to accurately touch/tape/swipe without really looking – because both it and your finger are moving. 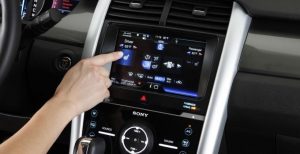 This means your attention is necessarily divided between the screen and the road. You can glance back-and-forth between one and the other but it is not possible to keep your eyes on the road and the screen at the same time.

This is considered distracting – and is often illegal for that reason  . . . when it comes to the use of cell phones in cars. But it comes standard in almost ever new car. Even more cognitively dissonant is that people are encouraged to be distracted thereby since many of the car’s necessary functions cannot be controlled except via the touchscreen.

You don’t have to make a call or send a text. You pretty much do need to be able to turn on the defroster. Assuming you want to be able to see the road  . . . once you take your eyes off the touchscreen. 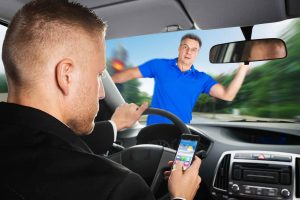 Actually, it’s revelatory. Of the true reasons for the rules. They are not imposed for saaaaaaaaaaaaaaaaaafety or (lately) “health” but to rule us. The excuse is just that and usually obviously so if examined even a little bit – whether it’s Face Diapering and cattle-chuting or LCD touchscreening.

So what is the real purpose with regard to touchscreens? There are two of them, chiefly – one economic and the other political.

It is cheaper to build a car with a touchscreen to control most of its secondary functions that way than to build one with manual (knob/button) controls for each of these functions. A single touchscreen can be plugged in to a harness as the car moves down the assembly line more quickly and with less effort than the installation and hooking up (and checking the function of) several different individual physical controls for the same functions.

This saves money during assembly and increases profit at sale because a touchscreen is itself cheap even though it looks slick. Many are made by the same supplier and not even unique to the model of car they’re installed in. There is also the potential for more money to be made after sale, when the touchscreen goes dark and no longer controls anything. It’s not like a broken button for the climate control that can be easily replaced – by you.

It requires a new screen, replaced by the dealer. 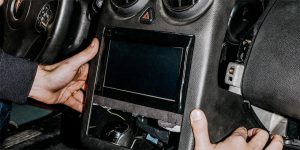 There is also a more benign factor in play – which is that modern cars have so many features it is hard to find space for physical controls on the limited dashboard/console real estate, which would otherwise be peppered with buttons and switches. A single large touchscreen cleans up the car’s interior layout, which is a legitimate plus from the standpoint of both the car’s manufacturer and its owner.

But, there is another purpose in play that is more sinister. The political purpose. Which is served by not enforcing or even imposing the rules which apply to cell phones.

Touchscreens in cars encourage people to pay less mind to driving – in order to acclimate them to not driving at all, which is the end goal of those who rule us. Touchscreens are being used to purposely distract drivers – which serves the purpose of creating the problem of distracted driving. Which calls for the solution:

Which is the real reason for the use of touchscreens designed to to keep people occupied with distractions instead of focused on their driving.

The touchscreen’s very perplexity is its primary advantage in that it makes the driver yearn for a car that doesn’t require him to drive it, so that he can give full attention to the menu and all that entertainment.

It isn’t a coincidence that the rise and ubiquity of the in-car flatscreen dovetails with the rise – and hoped-for-ubiquity – of self-driving car technology, which is also dangerous but never mind… because it serves a purpose.

The two go hand-in-hand like government and legalized theft.

Note that the more self-driving the car, the larger its touchscreen generally is. And the more comprehensive, too.

Teslas, for example, have huge touchscreens; practically every control is controlled via touch/tap/swipe – and the driver is encouraged to cede control over the car – to the Autopilot – so that he can play with all the brightly backlit apps.

Keep them amused, you see – and you can keep them under control.

And that’s the rule for all the reasons.