Do you ever get a return on investment with a hybrid? Even a quality one from one of the most reliable car manufacturers?

When hybrid cars first appeared almost 20 years ago, their main draw was that they used much less gas than other cars. They were slow, but you saved money.

This made going slow worth it.

Then gas got cheap – and electric cars got fast.

Which made spending extra for a slow hybrid a harder sell.

The latest hybrids offer a new argument: More performance, better gas mileage – and none of the practical problems of speedy but only briefly range-and-recharge-restricted electric cars.

One of them – the new Honda Accord hybrid – offers something else as well. 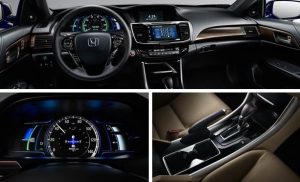 The 2020 Accord hybrid is the most powerful – and lowest-priced – mid-sized hybrid sedan on the market.

It is almost Prius-sippy but not as gimpy.

Which will cost you more to gas up – while going slower.

And not nearly as far.

The Accord hybrid also has a much lower sticker price than its main rival, the hybrid version of the Toyota Camry sedan, which lists for $28,250 to start. 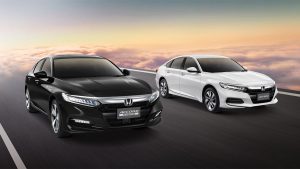 Which is about the same as an Accord EX ($29,370) with 17-inch wheels, a sunroof, an upgraded HD stereo with eight speakers, AppleCarPlay/Android Auto and an eight-inch LCD touchscreen. The almost-the-same-price Camry LE comes standard with 16 inch wheels, a six-speaker stereo and a seven-inch touchscreen.

There is a wild card pending, however – the not-yet-here hybrid version of the 2020 Hyundai Sonata.

One problem that all hybrids – and electric cars – still have is silent running. Well, it can be a problem for oblivious pedestrians in the vicinity of a moving and silent-running hybrid or electric car who step in front of one while pecking at dey sail fawn. 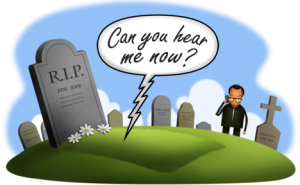 To avoid this, Honda has added an exterior chime system to alert oblivious pedestrians to the Accord hybrid’s presence when it’s operating in EV mode.

Which is a shame – because silent running used to be a particularly cool thing about hybrids and electric cars.

It reminds one of the early days of the automobile – when there was a requirement that a man waving red flags precede the car, to announce its impending arrival.

What’s Not So Good

Standard stereo in base trim has just four speakers – and you can’t buy a better one a la carte.

You can’t buy anything a la carte – without buying one of the higher-priced trims. 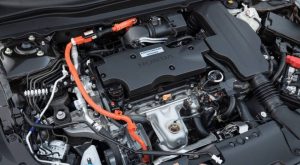 All trims come standard with a 2.0 liter four cylinder engine paired up with a lithium-ion battery pack and two electric motors, the combo generating a combined output of 212 horsepower and 232 ft.-lbs. of torque at zero RPM.

The non-hybrid Accord comes standard with a much-smaller 1.5 liter engine, no electric motors or batteries, 192 horsepower – and 192 ft.-lbs. of torque at 1,600 RPM.

It doesn’t launch as hard – or go as fast. The hybrid can do a burnout. The non-hybrid can’t, unless you power brake it.

It also uses much more gas – especially in low-speed city driving, where the hybrid has an 18 MPG advantage: 48 MPG vs. 30 MPG. 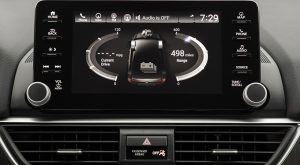 And on the highway, the hybrid still manages 47 MPG – 10 MPG better than the non-hybrid 1.5 liter Accord’s 38 MPG highway rating.

If you do a lot of stop-and-go driving, the hybrid’s much lower fuel consumption could earn back the $1,690 extra you spent on the hybrid in just a couple of years and after that, the savings could be significant.

Especially if gas prices go up – which seems more likely now not because of shortages but because another war in the Middle East is. The last time things got hot we were paying $3 for a gallon of regular unleaded.

But even if the cost of gas stays low, there’s one way the hybrid Accord will almost certainly save you money: By not forcing you to buy a replacement battery. At least, not as soon as you would probably need to if you bought an electric car. 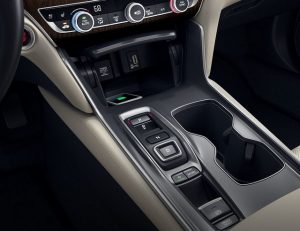 The reason being the hybrid’s battery doesn’t have to work as hard – because it only works part-time. It also never gets drained – because it is constantly and automatically being topped off by the gas engine. You can’t forget to recharge it – or run it to nearly nil charge – as can happen in an electric car driven to the hairy edge of is maximum range, which leaves it with almost no charge remaining.

Heavy discharge/recharge cycling is to electric car batteries what constantly flooring the gas pedal is to IC engines.

Or don’t replace it. 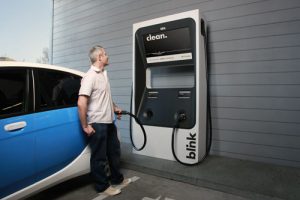 Unlike an electric car with a croaked battery – which is a bricked electric car – you can still drive a hybrid with a sick or even croaked battery. Because it still has an engine. You probably won’t get 48 MPG. Or get to 60 in 7.2 seconds, as the Accord hybrid does when its battery is healthy.

But you won’t be walking.

One other electric expense you will definitely not have is the cost of paying an electrician to wire up your house for a “fast” charger, in order to wait only 30-45 minutes for to get back on the road rather than overnight.

For EV buyers, that’s another $800-$1,000 or so not listed on the window sticker. But which is an unavoidable expense – if you don’t want to wait overnight to get going again. 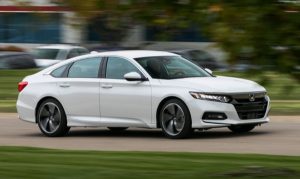 A Tesla Model 3 (which costs $15k more to start) only goes about 250 miles before it needs to be recharged, which requires stopping – and waiting – for at least 30-45 minutes, assuming you have access to a “fast” charger. You may have one at home – but how about where you’re headed – or on the way there?

If not, the wait will be much longer. Especially if there’s another electric car ahead of you in line.

This is the main practical problem with electric cars. 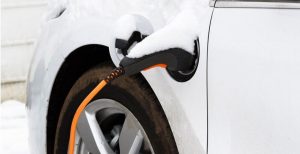 It’s no problem with a hybrid car.

The Accord hybrid isn’t tethered to a plug – because it carries its own source of electricity. The gas engine provides generating as well as motive power. You only have to stop when you run low on gas – which happens very infrequently. The Accord hybrid can travel 600 miles in between fill-ups – whether you’re driving in the city or on the highway.

The longest-range electric cars available can only travel about half as far – and they make you wait literally five times as long (at least) to recharge. 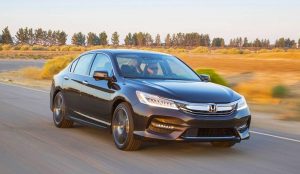 Having the ability too “toggle” in between electric and gas – and in-between – makes hybrids much more practical than electric cars while also being much more fuel-efficient than any non-hybrid car that isn’t a diesel-powered car. Those have been fatwa’d off the road  – probably because they make electric cars look so  . . . ludicrous.

Hybrids also make electric cars look ludicrous – which is why they’re probably going to be fatwa’d off the road, too.

Unlike electric cars, hybrid cars like the Accord aren’t affected much by cold (or hot) weather. An electric car is – because batteries droop when it’s very cold – and drain faster when high-draw electrically powered accessories such as the heater are used.

This can result in a 30-50 percent decrease in the electric car’s real-world range.

The Accord hybrid heats for free – by using the warmth generated by the engine. And while running the AC in summer might use a bit more gas it has little effect on range and no effect on refueling times.

Of course, efficiency – and practicality – aren’t everything. Especially when gas is cheap. 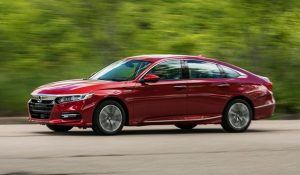 The Accord hybrid gets to 60 in 7.2 seconds – not quite Ludicrous Speed, but much quicker than a Prius, which needs almost ten seconds to heave itself to the same speed. Without much MPG gain. The Prius rates 54 city, 50 highway – which isn’t tremendous compensation for all that absent acceleration.

It’s also not that far off the pace of the non-hybrid Accord with its optional 2.0 liter, 252 horsepower turbocharged engine. It gets to 60 about two seconds faster, but the point is the hybrid’s not slow in comparison.

Unlike the Prius. Which is.

The Accord hybrid is not a dedicated hybrid – like the Prius. Honda adapted a hybrid drivetrain to the Accord – which was designed as a conventional car that was converted into a hybrid.

With the result being a hybrid that doesn’t look like one. 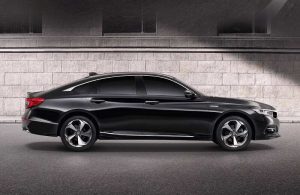 Which everyone knows is a hybrid because it practically announces it from built in speakers and flashes neon signs to alert the deaf.

But not everyone wants to preen green  . . . while going slow.

The Accord hybrid also has two inches more backseat legroom than its direct rival, the Camry hybrid – and the largest trunk (16.7 cubic feet) in the class. Its capacity is actually about 80 percent of the hatchback Prius’ capacity.

One thing the Accord has less of – if you buy the base trim – is options. There aren’t any. It comes as it is – which is decently equipped, except for one thing. You’ll have to make do with a mediocre four-speaker stereo without AppleCarPlay or Android Auto.

Eight (and ten) speaker HD stereos with AppleCarPLay, Android Auto and Sirius/XM come standard in higher trims, but these come with a much higher sticker price. 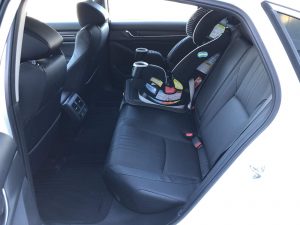 To be fair, EX (and EX-L and Touring) trims also comes with other upgrades – including a larger 8 inch touchscreen, HondaLink smartphone integration, heated rear seats (Touring) and a sunroof.

On the upside, you could easily upgrade the base trim’s stereo yourself – for much less than $3,900.

An interesting thing to know about the Accord hybrid vs. the Camry hybrid is that all Accord hybrids get the same great gas mileage while only the base trim Camry hybrid gets the best-case/advertised mileage of 51 city, 53 highway.

Because the base trim Camry has a different battery pack while all Accord hybrids have the same battery pack.

It gets more interesting, too – because all of the Camry hybrid trims except the base trim get worse mileage than any Accord hybrid trim. The difference is significant, too. While the base Camry hybrid’s 51 city, 53 highway is class-best all the higher trims get just 44 city, 47 highway. 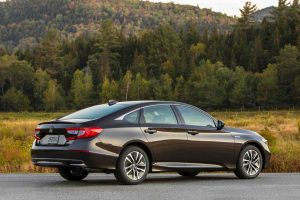 Unless you want a better stereo.

In addition to higher MPGs, the $28,250 to start base trim Camry hybrid comes standard with a six-speaker stereo.

With the exception of the stereo upsell, the Accord hybrid sells itself. It’s a deal compared with its hybrid rivals – and it’s less hassle than its electric rivals.

Most of all, it’s not slow.