Now They’re Coming After What We Eat

These stories pop up all the time. How the government feels the need to dictate what we put in our body. Sure – for a while “drugs” were a thing most people were on board with, but some folks (like us) would at least point out that “doing drugs” was essentially a victimless crime. That is until a “drugged up” person actually committed a crime against someone else (theft, assault, etc.)

At what point do enough people wake up and push back?

Now They’re Coming After What We Eat

By Christopher Monckton via SOTT

At Harvard, there was once a University. Now that once noble campus has become a luxury asylum for the terminally feeble-minded. Walter Willett, one of the inmates (in his sadly incurable delusion he calls himself “Professor of Nutrition”), has gibbered to a well-meaning visitor from Business Insider that “eating a diet that’s especially high in red meat will be undermining the sustainability of the climate.”

Farewell, then, to the Roast Beef of Old England. So keen are we in the Old Country on our Sunday roast (cooked rare and sliced thickish) that the French call us les rosbifs. But the “Professor” (for we must humor him by letting him think he is qualified to talk about nutrition) wants to put a stop to all that.

As strikingly ignorant of all but the IPCC Party Line as others in that hopeless hospice for hapless halfwits, he overlooks the fact that the great plains of what is now the United States of America were once teeming with millions upon millions of eructating, halating ruminants. Notwithstanding agriculture, there are far fewer ruminants now than there were then.

The “Professor” drools on: “It’s bad for the person eating it, but also really bad for our children and our grandchildren, so that’s something I think we should totally, strongly advise against. It’s — in fact — irresponsible.”

It may be that the “Professor” – look how fetchingly he adjusts his tinfoil hat to a rakish angle – does not accept the theory of evolution. If, however, that theory is correct, the Earth is somewhat older than the 6000 years derived by the amiably barmy Bishop Ussher counting the generations since Abraham.

(Comment: Note that the author is not referring to the ‘theory of evolution’ in the sense of neo-Darwinism…)

Agriculture, as we now understand it, only became widespread in the past 10,000 years. Before that, for perhaps two million years, our hunter-gatherer ancestors ate meat and fish and not a lot else – perhaps a little fruit and a few nuts now and then, but only in season.

If eating all that saturated fat was bad for them, how on Earth were they fertile enough to breed generation after generation across the rolling millennia, leading eventually to us?

Let me give the “Professor” a brief lecture in nutrition, about which he plainly knows little. The energy in our food comes entirely from three macronutrients: fats, proteins, and carbohydrates. 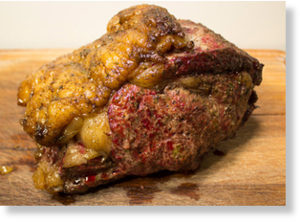 There is about 15-25% protein in just about everything we eat. So the question simplifies to this: what balance should we strike between fats, which come chiefly from meat and dairy products, and carbohydrates, which are bread, pasta, rice, potatoes, grains, seeds and sugars?

To answer that question, a short and painful history lesson will perhaps be helpful.

In the early 1950s Ancel Keys, a pop physiologist, announced that he had conducted a “five-country study” (later a “seven-country study”) which, he asserted, showed a link between the saturated fat from meat-eating and cardiovascular disease.

In fact it was a 22-country study, from which Keys had excluded 15 countries that did not show the result he wanted. Worse, he had failed to exclude an important confounder: namely, the latitude. The higher the latitude, the greater the prevalence of cardiovascular disease, chiefly due to Vitamin D deficiency caused by too little sunshine on the skin.

However, Keys went on to feature on the front cover of Time magazine, and he attracted an enormous grant to test his tinfoil theory on patients in six mental institutions and an old people’s home in Minnesota.

Ethically, the study was questionable: once the patients had consented, they were told what they could and could not eat, and were closely supervised to make sure they complied. They were divided into two cohorts: one on a high-fat, low-carbohydrate diet and one on a low-fat, high-carbohydrate diet.

The results were decisive: there was no additional incidence of cardiovascular disease among those on the high-fat diet. Keys arranged for publication to be deferred for more than a decade.

In 1977 the “Democrats” decided to issue guidelines to the people on what they should and should not eat. The National Institutes of Health invited nutritional stakeholders to a closed-doors meeting that lasted two days. Those present were told they would not be allowed to leave the room until they had put their signatures to a pre-drafted “consensus statement” recommending a carbohydrate-rich diet. One by one, they all caved in and signed it.

Comment: Which should make one wonder how many other statements, policies and tracts of legislation get passed and implemented as a result of coercion, manipulation, threats and lies?!

Now, where have we heard that word “consensus” before?

Only after the guidelines had been safely published did the Minnesota study come to light. But by then, of course, it was too late.

At that time, metabolic syndrome, obesity, diabetes and its numerous complications, dementia and Alzheimer’s Disease were all rare. Less than 2% of the population were diabetic.

However, within two years of the promulgation of the guidelines at the instigation of a Senate Committee under George McGovern, the incidence of all these diseases began to rise. Now, as a direct result of those genocidal guidelines, two health dollars in three in the United States are squandered on diabetes and its dreadful sequelae.

Nor can it be said that the greater incidence and prevalence of diabetes is chiefly attributable to failure on the people’s part to adhere to the guidelines. To a significant extent, the guidelines are being followed, and it is becoming daily clearer that it is the recommendation that carbohydrates should be the staple in our diet that is causing the diabetes crisis. 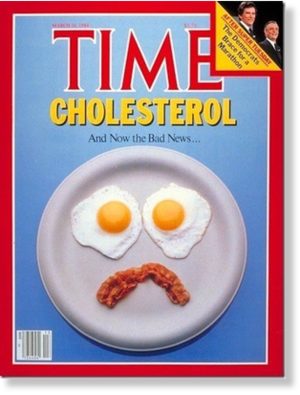 By 1984 – an appropriate year – the crazed, tinfoil-hat-sporting nutrition brigade were railing against cholesterol, which made it on to the front cover of Time.

In 1994, the British Government of John Major (who had the reverse Midas touch) decided to copy the U.S. dietary guidelines. At that time, diabetes and obesity in Britain were rare. Within two years of the introduction of the guidelines, just as in the U.S.A., the evidence of compliance with the guidelines began to mount, as did the incidence of diabetes and related diseases.

Now, some 10% of the National Health Service budget is squandered on diabetes and its complications and the prognosis is no less dreadful than in the U.S.A.

Though nutrition “science” is as dominated by hard-Left extremists as climate “science”, courageous skeptics have begun to come forward. In Australia, a doctor who had recommended to diabetic patients that they should cut down on the carbohydrates and increase the fats was subjected to a two-year disciplinary process by the medical authorities, at the end of which they were compelled to admit defeat because he was curing his patients.

In Sweden, the medical authorities waged a similar campaign against a doctor for the crime of curing her patients of diabetes by telling them to eat fewer carbohydrates and more meat. She stood bravely firm and the authorities were compelled not only to issue a complete and abject apology but also to change the Swedish dietary guidelines.

Within two years, consumption of butter, which had been falling for two decades in accordance with the guidelines against saturated fats, had recovered to pre-guidelines levels, and the incidence of new diabetes cases began to fall.

Today, hardly a month goes by without a new double-blind trial, epidemiological study or meta-analysis in the medico-scientific journals demonstrating beyond doubt that diabetes and a range of other diseases are directly and principally attributable to the misguided guidelines recommending that carbohydrates should be the staple diet.

How do I know all this? Because 18 months ago I went to St Bartholomew’s Hospital in London to be told by a solemn-faced endocrinologist that I had diabetes. I had already suspected that, because I had noticed the distinctive odor sanctitatis on my skin. I had done some reading on it. So I told the specialist that I’d deal with it.

“You are not taking me seriously. You must realize that you have full-blown diabetes. This is a serious condition. You will have to be medicated.”

I refused all medication. By then I had read enough to know that it was the government guidelines that had given me diabetes and that ignoring them would cure it.

Sure enough, after six months I went back to the endocrinologist, who looked at the test results and said that, though I was pre-diabetic, he would no longer diagnose diabetes.

Earlier this year, I went back again, this time at the hospital’s request, to undergo a day of tests not so much for my benefit as for theirs. The test showed that I was no longer even pre-diabetic. My blood sugar was normal. My blood pressure was that of an 18-year-old.

They were amazed that I had eradicated all symptoms of what they had until then imagined was an incurable, chronic, progressive and eventually fatal disease by nothing more complicated than cutting out carbohydrates almost completely, and eating rump steak three times a week, as well as lashings of bacon, full-fat cheese and heavy cream.

Oh, and fat doesn’t make you fat. I’ve lost 45 pounds – and I haven’t even dieted. Not a single calorie have I counted.

So when some pointy-head in a tinfoil hat from the Harvard Asylum for the Criminally Socialist says we should not eat meat, I beg to differ. However well-meaning the “Professor” is, and however naively perfervid is his belief in the New Religion of global warming, the advice to replace fats with carbohydrates is killing millions worldwide every year. Yet again, “settled science” – Socialist science – is wrong, and yet again genocidally so.

Comment: There is an incredible amount of money to be made keeping people in the dark about what helps keep them healthy, and what doesn’t. While the vast majority of healthcare workers, academics and bureaucrats probably mean well and are the unwitting tools of corporate interests and their insidious groupthink, it remains for each of us to do our own thinking and research on a subject that most individuals seem willing to abdicate responsibility for.

As the author mentioned, “hardly a month goes by without a new double-blind trial, epidemiological study or meta-analysis in the medico-scientific journals demonstrating beyond doubt that diabetes and a range of other diseases are directly and principally attributable to the misguided guidelines recommending that carbohydrates should be the staple diet.”

And with that, see this small sample of the research that’s been coming out on this now very rancorous topic: