Hope is Not Lost

Hope is Not Lost

[411 Note: This is a great piece. Because it shows that not every one of our beloved youngsters is set to follow the moronic path of technology. That some still love the good things in life. This is refreshing and enlightening! Hooray for some!]

By Eric Peters
Not every kid wants an Uber.

Some kids – one kid, at least – wants a 1972 VW Beetle. And now he has one. This is my young apprentice, Gage. He is going on 16 in a few months and needs wheels. Most uncommonly, these days, he wants them. The kid likes cars. He wanted to learn how to drive a manual transmission. Asked me to help him learn.

This made me feel like old Obi Wan in his hut in the desert. One day, Luke shows up . . . and he is interested in learning about the Force.

Possibly, there is hope. 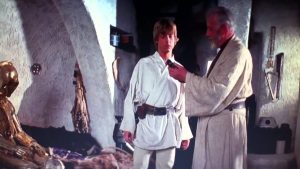 A third pedal is not unlike your father’s light saber, Luke…

Gage has already nearly mastered the third pedal – even before taking the imbecile “driver’s test” at the government haus where one must supplicate for the Empire’s permission before being allowed to sit behind the wheel and move a lever from Park to Drive.

As everyone knows, these  government-mandatory “tests” do not evaluate a candidate’s ability to competently operate a motor vehicle but rather examine his gift for rote regurgitation of various arbitrary rules and codes, a great many of them either fatuous  – always drive the speed limit! (you know, like cops do) – or downright dangerous – always come to a complete stop at all Stop signs!  – even when it’s blizzarding outside and the sign is at the top of a steep hill and you have cars behind you and if you dostop, you will almost certainly slide down the hill and into those cars behind you.

Teaching kids to drive is considered unimportant – else they would be taught to drive.

Rather than worry about the fraus at the DMV, Gage is learning to becom proficient with a clutch. 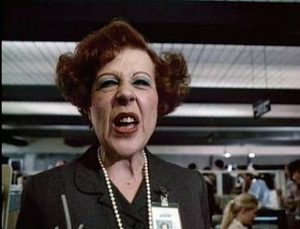 Once he is proficient, he will already be a better driver than most people ever become.

Those who can deal with a third pedal are always better drivers. It means their brains can handle multiple tasks, simultaneously, without (once mastered) even thinking about it. As Yoda told Luke: There is no try. Only do – or do not. So it is with driving with stick. If you can, you are automatically an order of magnitude above the average meatsack behind the wheel.

Those who can’t are not unlike a “pilot” who does not grok the function of the rudder.

Competently driving an old car with a manual transmission and without any government mandated “safety” features is further advanced schooling. It is the equivalent of a SEAL course and successful passage engenders in the candidate higher order skills. 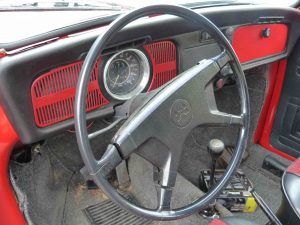 If you can competently drive a ’72 Beetle, not only can you drive any car – you can do so safely. A competent driver is the ultimate safety feature.

You’d think this would be important to the fraus – and “moms” – who run the country, but it’s not. They’d rather put the cart solidly in front of the horse and idiot-proof the car rather than take steps to assure there isn’t an idiot behind the wheel.

It is why there is no driver training worth mentioning, except as provided incidentally. A kid is taught all about buckling up instead. And being defensive; i.e., a passive, rule-fixated Clover.

Gage will learn all about skids.

That if he wishes to stop skidding, he will need to lift off the brakes – contrary to all modern teaching – because a 1972 Beetle does not have ABS. 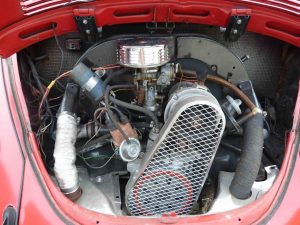 It doesn’t even have discs.

Accordingly, my young apprentice will acquire the habit of maintaining a following distance sufficient to give him space and time enough not just to stop but to ditch, should that become necessary.

Accelerating likewise requires planning. Another lesson he will learn.

The Beetle’s 1500 CC air-cooled flat four engine produces slightly more horsepower than a riding lawn mower’s engine; you learn to syncopate clutch and throttle and choose the right gear for each moment.

This is actually fun – something increasingly absent from anything modern. The latter overflow with power, which makes them too easy to drive and thus boring unless driven in a manner that is extremely illegal. Hence most people don’t. They plod along, like cattle, one following another. It is not much fun. 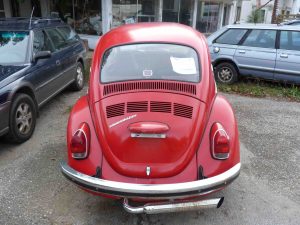 An old car is the sure cure for the problem of texting and driving. Only an expert driver can manage a 1972 Beetle and a small keyboard at the same time.

The headlights are dim, the cabin is cold and drafty – which is lucky, given the Beetle’s “heating” system, which conduits carbon monoxide and oil fumes into the cabin. The drafts dilute this, so that focus on the task at hand is maintained.

I have explained about keeping an old rag in the glovebox – not to check the oil but to keep the windshield clear enough to sort-of see when it fogs up. He will learn about setting point gap and driving home in second gear when the clutch cable snaps one night – which it will do one night (probably a verycold night).

He will be equipped with a pair of screwdrivers, Philips head and standard, a crescent wrench, slip-joint pliers, some duct tape, RTV and a roll of wire. These are the essential things one needs to keep a Beetle on the road.

I envy him the memories he’s soon to have.

Tags: hope is not lost