Baseball and Common Sense {remember that?}

Holy crap. Society may be well into the baseball “playoffs” – but this story from the end of last season struck a nerve with me.

Some poor five-year-old girl at a Yankees game was struck by a line drive. See the story below.

She was eventually okay, but it was indeed a scary moment for her and her parents.

However, the expected “reaction” from everyone, including MLB players themselves, was for “more safety.” 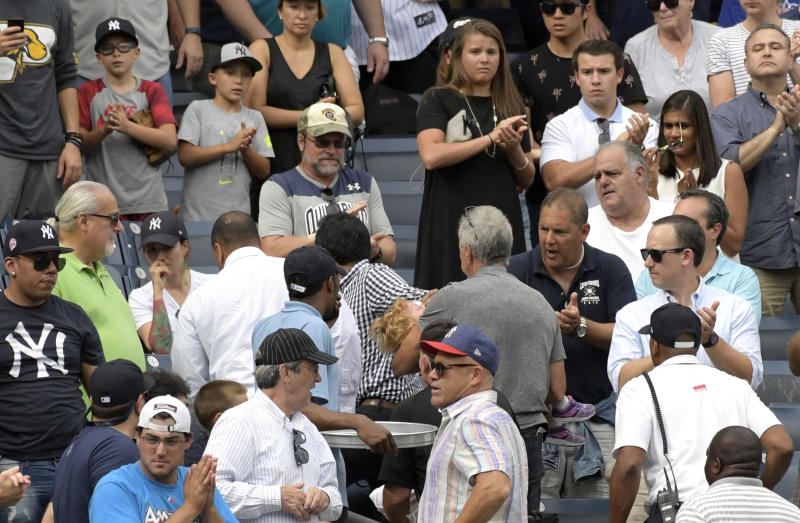 Going to a major league baseball game, along with jacked-up human beings who can practically hit the leather off the baseballs is serious business. If you are going to bring a fucking child to a game where high-velocity projectiles can enter the stands – pay attention!

Or get seats far enough away to give yourself ample time to prepare.

Besides the plethora of “prayers” and “hope she’s okay” comments on that Yahoo article – one stood out as spot-on:

“Two things. The responsibility of parents getting tix that close to the field. Every pitch you need to be watching the game and the child at the same time. There’s no f–kin’ around. Two, pay attention. If you’re a parent on a phone or doing dumb s–t while the game is in progress, go sit in left field. This is pretty avoidable imo.”

I was astonished that comments that contained complete common sense were allowed on MSM sites these days. Refreshing. (Was probably censored after we copied and pasted it…)

I cannot emphasize enough the fact that when you enter a stadium with flying projectiles to make paying attention a paramount objective. Maybe one of the continuing drawbacks of social media?

While I always have a heavy heart when a young one gets unintentionally injured – I believe there is a better way than just calling for “more safety.” We all went to baseball games in the 70’s and 80’s – and we paid attention. Even caught foul balls, too! You go to a game to watch it. Not to be on your phones taking selfies and updating social media.

Anyway – below is the original story.

NEW YORK – They carried a little girl out of Yankee Stadium on Wednesday afternoon. She left in an adult’s arms.

In her field-level seat on the third-base side, she was struck in the face by a line drive in the fifth inning of the game between the New York Yankees and Twins. The Yankees released a statement saying the girl was treated at the stadium and then taken to a nearby hospital. Yankees manager Joe Girardi said later that the girl was, “doing OK.”

The protective netting at Yankee Stadium stops short of the dugouts on both sides. If the design technically satisfies Major League Baseball’s 2016 mandate that clubs add netting to safeguard their customers from airborne bats and balls, it is inadequate as compared to many other ballparks and, on Wednesday, for one of their fans seated within shouting distance of third base. The Mets, for one, this season extended the netting at Citi Field well beyond the far ends of the dugouts. Other teams have taken the same precaution, not because they were ordered to, but because their fans were at risk.

In the fifth inning Wednesday, Yankees third baseman Todd Frazier lined a ball past the third-base dugout and into the seats. The ball left the bat at 106 mph. The crowd groaned, and people near the girl began frantically waving for medical personnel. Joe Espada, the Yankees’ third-base coach, rushed to the wall. Frazier knelt and bowed his head. Gary Cederstrom, the plate umpire, turned away. At second base, Dozier and Yankees baserunner Matt Hollidaystood together and, according to Dozier, prayed for the little girl who’d been struck. At third base, Eduardo Escobar dabbed at his eyes. In the stands, people stood with their hands on their heads, or over their mouths.

“I just saw blood coming out of this poor girl’s face,” Escobar said through a translator. “I have kids.”

Many coaches and players urged the clubs and the league to install more netting at Yankee Stadium and other ballparks. The teams that have resisted generally cite the wishes of their season-ticket holders, who prefer the cleaner sightlines potentially lost in the netting.

“Every stadium needs to have nets,” Dozier said. “That’s it. I don’t care about the damn view of the fan. It’s all about safety. I still have a knot in my stomach. I hope that kid’s OK. We need nets. Or don’t put kids down there.”

Said Frazier: “Yeah, I think the netting should be up. I think every stadium should have it. But we’re not at that point yet. Hopefully they’ll take a look at all this and figure something out.”

Escobar pleaded for fans, in the meantime, to remain focused on the game, to protect their children or to sit in safer areas of the ballpark.

The Yankees declined comment, other than to say the girl had received treatment.

“It stops you in your tracks,” Twins manager Paul Molitor said. “It’s a little perspective.”

As reporters filed from his office, Molitor called after them, “Hey, is she OK?”

The victim mentality grows by the day. I guess the contract on the back of the tickets doesn’t matter anymore. Maybe instead of making stadiums safer, teams can make each and every ticket holder sign a disclaimer before hand. What next? People suing the organizers of the running of the bulls in Spain? Seriously, there is risk with everything in life. A bandaid approach is not necessary. Better planning and awareness is!