There will be more

There will be more
By Eric Peters

[411 Note: Some food for thought for today. Think about the world around you.]

As this society becomes more and more officially violent, it is probable that unofficial violence will also increase. In fact, it is almost a mathematical axiom. It is also one not comprehended by those most responsible for initiating the process.

Police and politicians seem baffled by the growing disenchantment with their class. They seem to expect people to behave toward them with respect and deference no matter what they do – by dint of the fact that what they do is Official and Legal.

Why are politicians – left and right – increasingly despised by reasonable people? Could it have anything to do with the fact that they will not leave people alone? That all they do – at great expense (to us) and with great pomposity – is decree how we will be allowed to live, what we must do and what we may not do? Most of these things being precisely none of their business to so order? 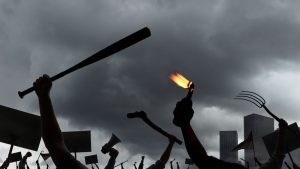 But they believe that it – that everything – is their business, which endows them with an effrontery so great they’ve lost all of the normal restraints that bind ordinary people. We have arrived at a point in our history that absolutely nothing is off the table, beyond the grasping control of these professional grifters – which is what they are. These are not people who earn an honest living by free exchange of value for value, as most of the rest of us do. These are people who take vast sums of money and then dispose of vast sums of money – none of it theirs by right.

They do so with an entitled insolence that is insufferable to those from whom the funds are mulcted. The worst part of it being that the mulcted are rendered legally defenseless against these outrages. A law is passed, an order given – and they must“stand and deliver,” as the old saying goes.

If one had a neighbor who behaved this way, one would bar the neighbor from one’s property and – if there was no alternative – defend oneself against such a violent busybody.

But what defense is there against the political class?

That is like trying to plug a leaky roof with sheets of copy paper. At best, the rivulets will temporarily lessen. The rain won’t let up.

Instead of protecting our rights, politicians spend their time gutting them, turning them into conditional privileges at best – to be further conditioned (or rescinded) at their pleasure. Nothing of ours is safe. Not our money, not our property, not our freedom to act and live as we see fit. There is no line over which these professional disposers of other people’s lives and property and liberties will not step as they are held back neither by ordinary human decency or legal restriction.

They have become a ruling caste, as entitled and arrogant as their feudal analogs.

The glib violence which inheres in their every act and statement has become so much a given that they hardly notice it anymore. When a new “plan” or other such is presented, the fact that what is being suggested involves more compulsion and violence, that people will have no choice, is never even mentioned. The discussion is increasingly centered only on the supposed merits of the “plan” – and alternatives to the “plan.” That is to say, other “plans.”

The average honest wage-earner in the productive economy now “owes” his Lord(s) more than a Medieval serf owed his Lord. The typical tax exaction – when one includes the income tax, the Social Security taxes (15 percent off the top for the self-employed), the taxes on their property and so on – approaches half of every dollar they earn. The burden has become so extreme that most people must now earn two incomes to support one family and work until they are too old to continue working. The oasis of financial security recedes ever farther into the distance, never to be reached.

The productive class would like to be left alone – would like for the mulcting to cease. Meanwhile, the client class (their ranks swelling with Millennial Marxists) demands ever-more-mulcting for their unearned benefit, which the politicians are happy to oblige as they receive payment for their services in the form of ever-increasing power. 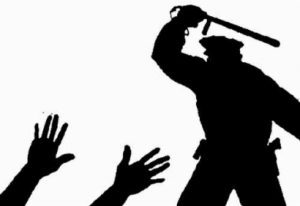 As it does, more overt violence becomes necessary to keep the pressure cooker’s lid clamped in place.

Enter the Praetorians. Or what is styled law enforcement.

It is no accident that this term – which is brutally honest – has become the preferred one. Nor that these enforcers of the law wax brutal. Behave toward the citizenry as occupying soldiers, barking orders and expecting – demanding – immediate submission.

Resentment of this bullying is also increasing.

Which has the effect of justifying a kind of doubling-down by the enforcers – whose mental state is becoming exactly like that of an occupying army dealing with threatening partisans. A soldier of the Werhmacht and veteran of the drang nach Ostenwould understand completely the fearful bleat of “officer safety” eructed by the enforcers of the law.

It is none of it good.

And it is going to get worse.

Because violence is fungible.